Sunshine after the rain 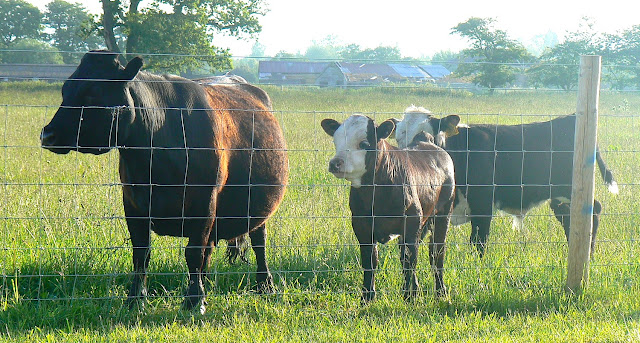 What’s the weather like with you? It’s been pretty wet here off and on, and sunny in between. As a result the grass has been shooting up and the pasture’s like a jungle. In fact it is now so long that we have had to call for a bit of back up in the shape of a few cows to eat it down.
As the rain clouds finally cleared yesterday and the evening sun came out, my friend arrived with a couple of her Dexters, Buttercup and Sunshine, and their calves.  Buttercup has stayed with us before and soon recognised the place and settled in. Sunshine and the calves, Earnest and Algernon, took a little longer.
Lilly took great exception to the unannounced arrival of the cows in her field and marched Lucy and the lambies to the gate where they set up a protest. The lambies held a sit in (though I suspect this was in fact because they couldn’t be bothered to  stand up). Lilly did the next best thing to chaining herself to the railings by forcing her head through a gap in the gate and yelling, while Lucy paced up and down and joined in the synchronised bleating.
They kept this up until I eventually gave in and opened the gate, whereupon they all ran out of the field and into another one nearby where they chose to spend the night.
This morning however, the rain had passed, the sun was shining and everyone seemed to have settled down. The ewes were bleating to be let back in to their field, the cows had made themselves at home, and peace was restored again. All is quiet and calm. Until our own cows arrive in a couple weeks that is...!