Elvis has left the building! 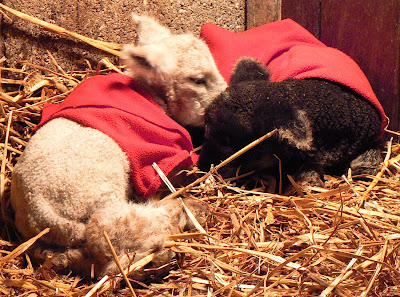 Phew what a day! The past 24 hours have been a bit of a rollercoaster. It began with a visit from the vet yesterday in response to Lilly’s lethargy and lack of appetite. She was treated with injections of calcium and a glucose drench. Then this morning, one of Poppy’s newly hatched chicks ended up out of the nest and, despite all my efforts, it died of hypothermia.
By late morning Lilly had gone into labour with triplets, one of which was stillborn and one that needed a dose of lamb kick-start and a bottle feed of lamb colostrum to get it moving. When it did finally get moving, it became apparent that it had a bit of a wobbly back leg which seemed to bend like he was a rock and roll singer. It has earned him the name Li’l Elvis! 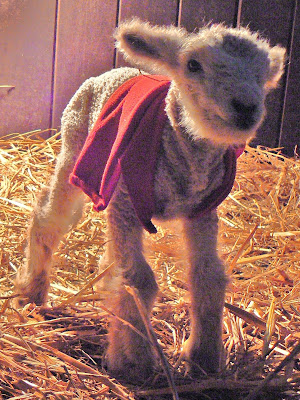 These minor livestock dramas are, of course, part of the joys of smallholding, but too many agricultural adventures in one day would make even Tom and Barbara Good turn to the odd glass or two of the old pea-pod burgundy!
On a positive note, I am delighted that Lilly’s pregnancy is finally over and relieved too, as I suspect that it was the dead lamb that was making her ill. She is now tucked up in a stable with her babies, who are wrapped in pieces of red fleece which resemble little Superman capes. They have a warming lamp, a deep straw bed to keep them cosy, and tummies full of their mum’s milk.
The weather here continues to be bitterly cold and windy. By the time the light has faded, it gets harder for me to find the enthusiasm to go out and do my rounds in the dark. Today though, the prospect of cuddling tiny little lambies dressed as super heroes does make it really worthwhile!

Posted by thechickenwhisperer at 14:20 6 comments: 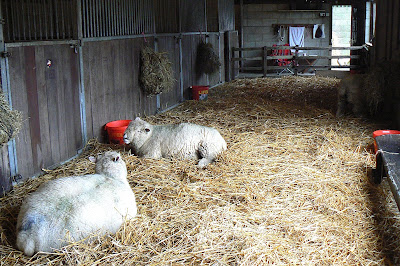 Well I have made up a lambing shed in the stable block and set up my lambing survival kit, including kettle, tea bags and sleeping bag. The sheep really seem to like it and, as it gives them access to the small paddock, they spend their time wandering in and out depending on the weather. They don’t seem to mind me pottering about in there, watching them or whittering on to them about little lambinos.
I have set up a lambing advent calendar on the whiteboard and I count down the days till lambing for each of the girls each day. I like to involve the girls in this daily ritual and, to be fair, Lilly and Lucy do try their best to look in the direction of the noticeboard and feign interest. Pippin is the most interested in the board and comes over to help. As a first timer she seems a little anxious about the prospect of lambing. Tickling her ear seems to relax her (well, it works on me too), as does chewing the end of the marker pen and the string that it’s attached to. That’s Pippin by the way, not me!
I must confess that as a first timer myself, I feel a little anxious too. I’m confident of my role as shepherd, nurse and lamb deliverer, but worried for my girls in case they suffer a  prolapse, Twin lamb syndrome, Schmallenberg virus or ring womb. But, as a friend advised me earlier this week, perhaps what I should really be worrying about is whether any of them have another one like Nelly!

Posted by thechickenwhisperer at 13:26 7 comments:

When Cathi, my publisher, asked me if I could do a book signing session, I got completely the wrong idea. In fact, the idea that I got was clearly well above my station. You see, I thought of the book signings that I had attended in the past, and imagined myself behind a desk in a busy bookstore. I would be surrounded by crowds of admirers, all jostling for a signed copy of my book to treasure, or wanting to capture a photo of me beside them, smiling demurely, with which they might then impress their friends.

So, having put on my best “I am an author” ensemble, I arrived at the publishers armed with spare pens, witty chicken anecdotes and full of excitement. But no, that was not quite what Cathi had in mind. My excitement was short lived. I was handed a box of my books and returned home to sign them at my humble kitchen table. They were intended for the customers who had already pre-ordered the book!

Although I didn’t have a crowd of adoring fans at my door when I returned, I did have a small welcome party of cats and chickens who were reluctant to form an orderly queue. I managed to squeeze past them all and set up my signing station at the kitchen table, but as soon as I opened the door to greet the postman, the cats (Polly and Toby) and some of the chickens (Hetty and Blossom) took the opportunity to dash past me and get in on the action.

I was quite flattered at first. Well, at least they seemed more excited about the book signing than the postman! The cats, as it turned out, were actually only interested in their food bowl, and the chickens? Well, there was a digestive biscuit on the table when I went to answer the door that was gone when I got back...

You can always rely on animals to keep your feet firmly on the ground!

Posted by thechickenwhisperer at 18:30 6 comments:

The 10 secrets of chicken whispering – Secret 3

Don’t get deterred when things don’t work out quite right the first time. Chickens learn quickly but those that are timid or fearful take a little longer. Be patient and you will eventually win over your birds. If what you are doing isn’t achieving the results that you are looking for, then perhaps you’re just not communicating the right messages.
Find a comfortable spot, take a pad and pen with you if it helps, and just observe your chickens.  Watch how they call each other, or drive each other away, and try to relate to them on their terms. Be prepared to mimic their body language and vocal sounds to communicate more effectively with them if necessary.
You’ll probably feel a little ridiculous to begin with but remember, you won’t have to do a chicken impersonation forever! Once your birds understand what you want from them by using their language, you can scale your noises and movements down until a subtle action or command achieves the same affect.
Happy Whispering

Posted by thechickenwhisperer at 13:38 6 comments: 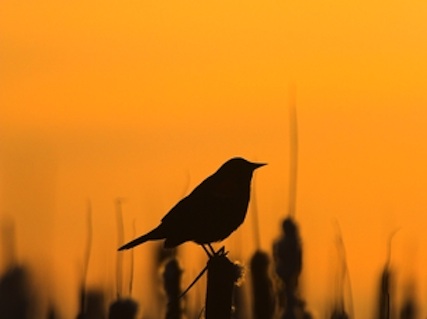 As a result of the recent sunny spell that we’ve enjoyed, I have been pottering outside until well after sundown. This is something that I haven’t done since the end of the summer and I had forgotten just what I have been missing. The sinking sun set the sky on fire and the shapes of the trees swathed in the evening mist were really quite magical.
Another feature of this time of day is the activity of the birds at dusk. The wren was preparing to settle in the ivy for the night, the two male pheasants were picking their way through the hedgerow, and the air was filled with the challenging call of the resident blackbird announcing his claim to his territory. His beautiful song, which reminds me so much of summer, was only interrupted briefly by the rhythmic whooping of a pair of swans silhouetted against the orange evening sky as they made their way to their evening roost.
The last two crows to go to roost were preening on the fence posts as the light finally slipped away, before flying lazily to the top of the tallest trees. The tawny owl made his presence known with his questioning "hooo hu huhuhuhooo" from the cover of the conifers.
The light fades quickly at this time of year and it was soon damp, cold and dark, and the welcoming glow of the lights in the house and the promise of tea beside a roaring fire eventually drew me inside. But the twilight sights and sounds of my garden visitors were all well worth braving the chilly evening temperature to witness.
What a beautiful world we live in. 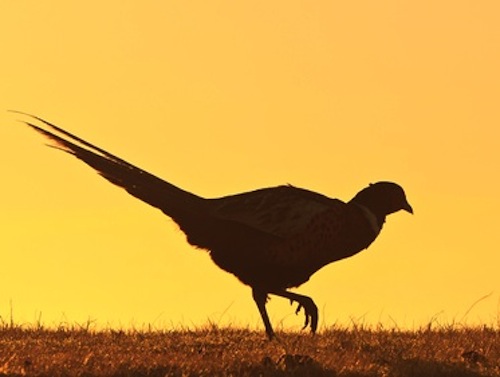 Posted by thechickenwhisperer at 17:35 7 comments:

I love snowdrops! They are always the first sign that Winter is ending and the new year is on the way. 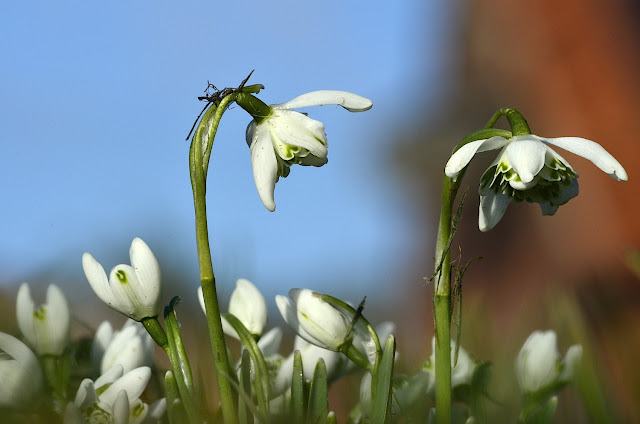 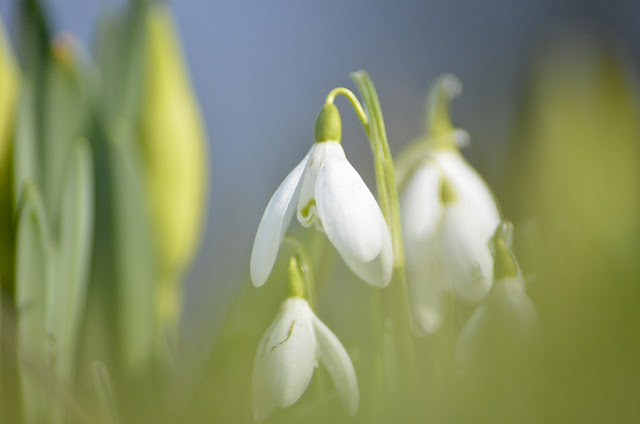 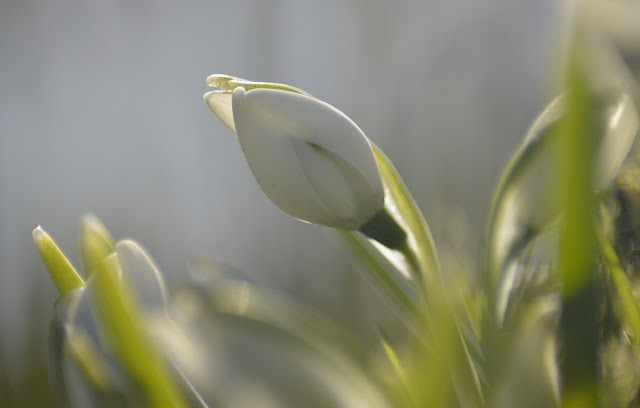 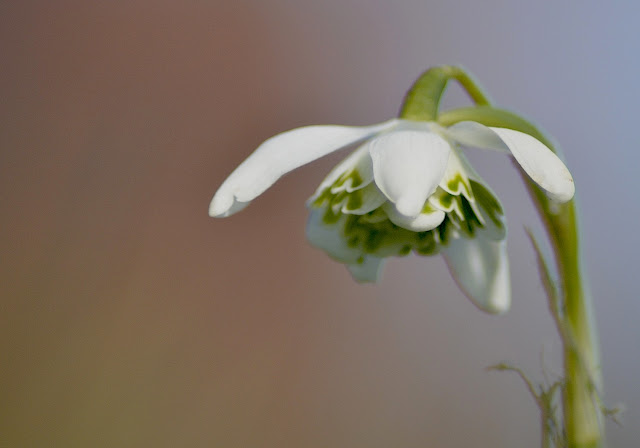 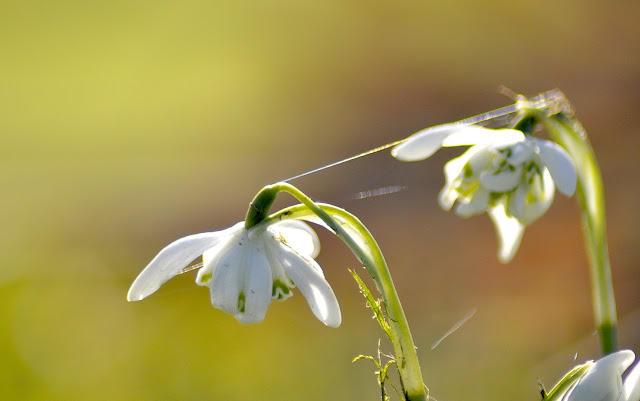 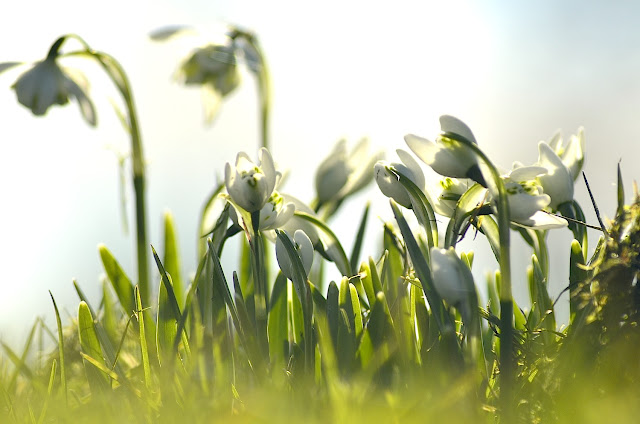 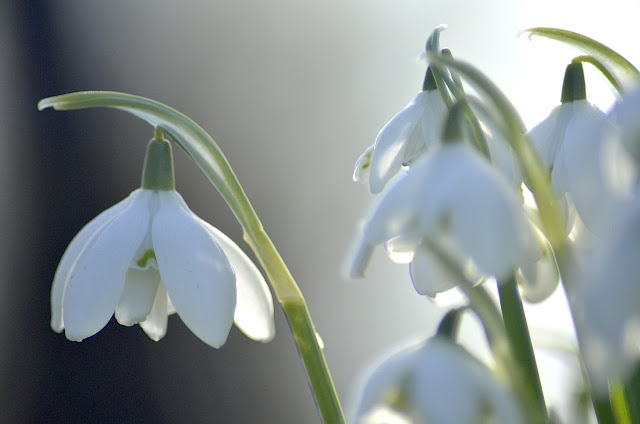 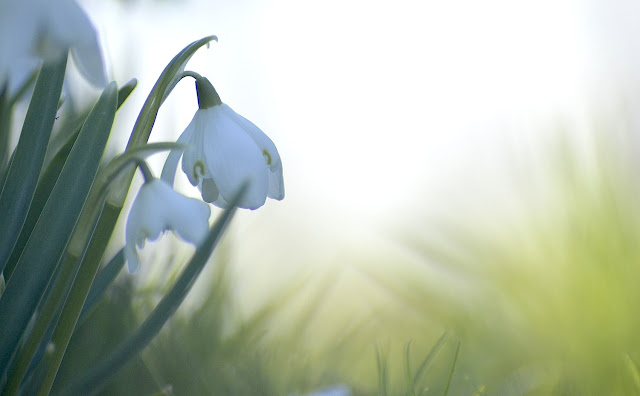 Posted by thechickenwhisperer at 18:31 8 comments:


Hi everybody, my name is Helena Spindel, I live in Sweden, and I am one of the few that breeds LF Black Croads here. I was asked by Sue to share my impressions of a once-in-a-lifetime experience, a trip to the 2012 Europa Poultry Show in Leipzig. I went with a very good friend, 80 year old Gösta Dahlberg, a very experienced and well-known breeder of ducks here in Sweden.

The journey is over 450 miles, one way, and we had snow, sleet and hail-storms most of the way. I drove all night, and we got there early on a Friday morning. A lot of people were mad because they had opened the doors long before the announced 11.am opening, and the crowds were already building up in the purchase-halls where you could buy all sorts of poultry. I did not spot many Croads, but it was not uncommon for a rooster to cost 100 pounds, or more! 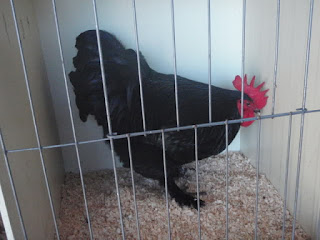 The size of the show was mindblowing and we spent 2 days there before I found the Croads. I was a bit disappointed with what I saw, I reckon that the ones I keep at home are just as good, if not better, both size and quality. But the size of everything, the number of breeds, over 90.000 (yes NINETY thousand) exhibitors, just took our breath away.

By the way, we also managed to eat while we were in Leipzig, and for the first time in my life I ate kangaroo. Best I have ever had. On the Sunday we tried to buy some birds, but it was remarkably disorganized, with many cages marked wrong, so after a few miles of walking in vain, we gave it up as a bad job. We spent 3 days looking at the show and hardly covered half, but we thoroughly enjoyed it and I have already started saving for the next Europa-show, 2014 in France. They have already promised that it will be half the size of Leipzig 2012, and thank goodness for that. The 2016 show is scheduled to be held in Denmark.
Posted by thechickenwhisperer at 15:58 No comments: