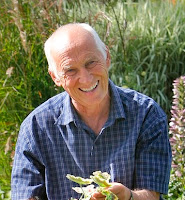 A guest-post by Roger Brook,
The No-dig Gardener

It’s both fun and worthwhile to get your annual vegetable seed order in now and be ready to go, as soon as sowing time comes. The choice of varieties in a seedsman catalogue or from the internet is vast, whilst a garden centre’s range may be slim, expensive and rather inconvenient. Browsing the seed catalogues is one of the few gardening pleasures in freezing January and February.

For the past ten years Marshalls Seeds have been my favoured supplier. This is partly a result of my own lethargy, but is mainly because of their fine range of vegetables and quality service. As an alternative for both vegetables and a very extensive choice of rare flowers, I recommend Chilterns. A very dear friend who grows connoisseur vegetables uses Seeds of Italy and speaks with great affection of his telephone enquiries with their man Paulo!
My annual procedure is simple. I first check if any of last year’s seeds are left in my storage tin. Most seed will keep for an extra year and some seed like tomatoes, will last forever! It’s a shame you get so few tomato seeds in a packet these days to put this to the test! I then cozy down with my catalogue and circle my chosen varieties. Ninety percent of them will be the same tried and tested ones I chose last year! Not being much good at writing or sums, I then find it much easier to go to Marshalls website and speedily pop in my chosen catalogue numbers and dispatch my order.
A  bakers dozen of my favourite outdoor vegetables

Brussels sprout Montgomery. These will give us a supply of greens for at least six months. We do not limit ourselves to the actual sprouts and ‘crop them to death’ eating tender green shoots until as late as mid May!
Sprouting broccoli Early sprouting blend. The shops cannot compete with freshly plucked mouth-watering shoots between January and May.
Leek Musselburgh. I broadcast these densely in early April and, from November, harvest over a six month period. We take the large ones first and leave the smaller ones to grow in the spaces. I do not ‘earth up’. I buy an extra-large size packet of leeks but do not buy more than a single packet of any vegetable variety I grow!
Sugar-snap pea Sugar Anne. Mice are a problem when I germinate peas, but it is worth some effort to grow unusual, not readily available, high-value crops.
Calabrese Zen. I used to avoid summer brassicas because of an imagined need to spray against caterpillars. I now don’t bother spraying and find the calabrese remains surprisingly clean. I like Zen because you can cut and come again.
Super-sweet sweet corn Lark. The difference in taste between super-sweet and sweet is as much as the difference between sweet corn and ordinary maize!
Carrot Early Nantes.
French bean Delinel. These pencil-beans retain their mature firmness and succulence for several weeks.
Runner bean Polestar. We actually prefer french beans and, towards the end of the season, let runner bean pods swell and dry. Dried runner bean seeds make a tasty addition to winter stews.
Curly kale Dwarf-curled green-kale. Last year I forgot to include this fashionable nutritious superfood on my list. I subsequently searched for seed everywhere, without success! This was a very silly thing to do as it’s so simple to quickly order even a single new packet on the internet. We get double value from this vegetable, we eat leaves in Summer and Autumn and young shoots in Spring.
Outdoor cucumber Burpless tasty green. I just love that name! I don’t quite understand why anyone grows greenhouse cucumbers when the outdoor ones are so much easier and tastier.
Courgette Zucchini. One of the earliest and easiest vegetables to grow. Cut them often to ensure a continuous supply of courgettes. But, on a couple of plants, let the marrows grow large. They will keep in a cool dry place until Christmas and the longer you keep them, the tastier they will be.
Broad Beans Meteor-Vroma and Jubilee-Hysor. I nearly forgot to include these, our most favourite vegetable of all. And they freeze so well.
Falling into temptation
Each year there is an exciting array of wonderful new premium priced varieties. Most will have a hidden achilles heel but, just occasionally, you will find a gem. I am being drawn this year to try two hybrids. One is a hybrid between a sprout and broccoli called Brussels flower-sprouts. The other a hybrid between a runner bean and french bean. As Firestorm self-pollinates, it might be worth a try for some early greenhouse beans.
I will not be buying any ‘sundries’
Seed catalogues lead you to believe that a long list of enticing items are necessary to grow seeds. Call me cantankerous, but I will not be buying special sprays and concoctions, taylor-made fertilisers, plastic propagation paraphernalia and ready-grown seeds! There’s nothing wrong with the latter, it’s just that it takes the whole fun out of growing your own. Don’t get me wrong, in previous years I have been extremely pleased with my Marshall purchases of perennial fruits.