The pleasures of potting 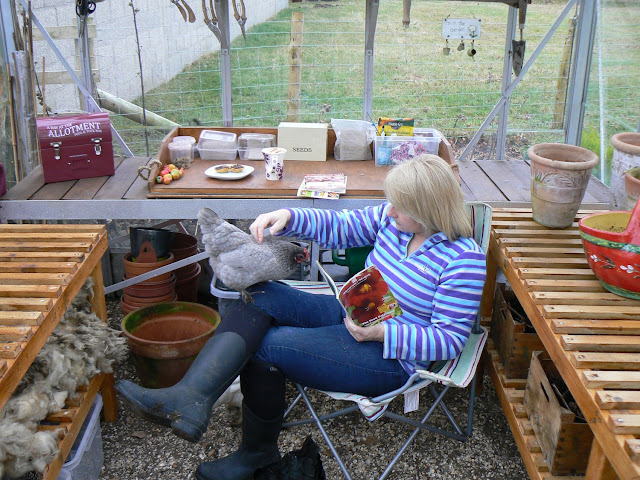 When the cold days become so cold that I can’t feel my hands through my gloves and the icy wind makes my ears ache, or when it rains the so hard that it stings your cheeks...then it’s time to retreat to the greenhouse or shed for what I call ‘potting time’.

Today was one of those days and although I set out full of good intentions, I had only got through half the jobs that I had planned to do in the garden before I retreated to the greenhouse with a frothy coffee, the seed catalogue, and a couple of homemade mince pies. 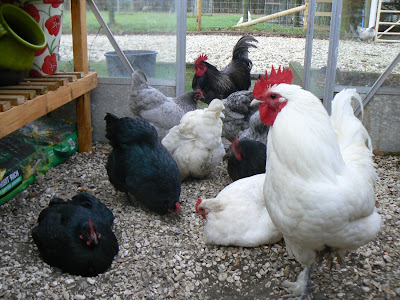 I use the term ‘potting’ quite loosely to cover any number of greenhouse activities, many of which do not involve potting up plants at all but can occasionally result in me dozing off while listening to Gardeners’ Question Time. So, although there was not even the slight glimmer of sunshine to radiate through the greenhouse, it was still cosy and dry, out of the wind and rain, and as popular as ever with my farmyard friends.

The chickens never miss an opportunity to join me in the greenhouse and I often find myself trying to step over a bunch of queuing hens all waiting for their turn to take a dust bath in there. Toby, the farm cat, likes to snuggle up on the sheep fleece that I use to protect my tender plants or lay on my knee and purr. 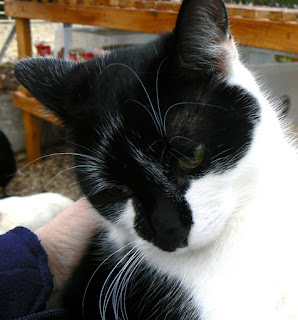 Blossom, the little blue hen, also likes to ensure that she doesn’t miss out on anything edible, so my attempts to read the seed catalogue and eat a mince pie were thwarted.

Still. It’s a great alternative to shovelling manure any day!
Posted by thechickenwhisperer at 20:50 7 comments:

The New Year sees us starting with a quartet of beautiful White Croad Langshan large fowl, courtesy of my dear friend Thorleif who has decided to reduce the size of his flock.
I have always been in awe of the huge Croad Langshans that I have seen at poultry shows. The cocks often reach such a size that they barely fit in the exhibition pens! So, although we hadn’t quite planned on having 4 new arrivals at the farm, we were happy to accommodate them.

The hens, Belle, Angel and Gloria, are all very sweet - though it would appear that Gloria feels that she has a lot to prove. This is probably because she is the lowest ranking in the group. Belle is the largest and most confident, and Angel seems keen to make friends with everyone.

The young male, Joseph, was hatched in May and is still very much a timid young man. I go into his coop each morning while it’s still dark and pick him up, just to get him used to being handled.  He is slowly getting used to me and the fact that I bring treats so he is starting to relax and settle into his surroundings.

Posted by thechickenwhisperer at 23:15 No comments:

A year in the life of our robin 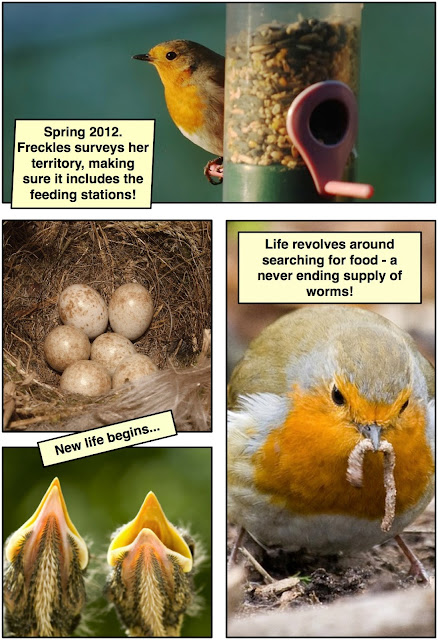 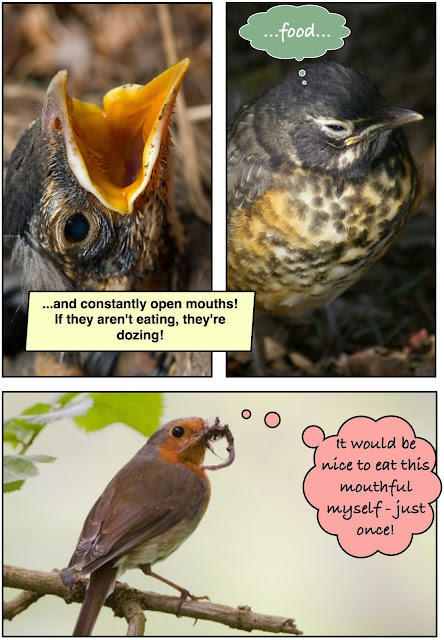 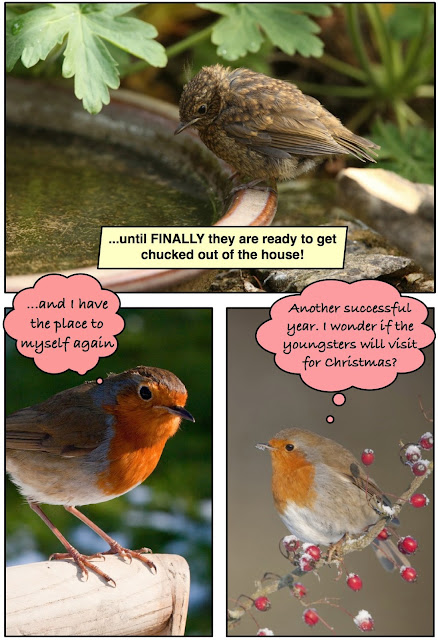 Posted by thechickenwhisperer at 09:21 14 comments:

One of the hardest things about winter for me is the lack of life about the farm. Not only is garden barren, and the vegetable plot laying fallow, but the wildlife is absent too. I can just about cope with the gloomy days, sunless skies, and dark nights, but it’s the emptiness that I find the hardest.

It’s minus 4 here today and not quite light yet, but the only wild creatures brave enough to be out and about are the pair of cock pheasants who roost here, and the blackbird.

I can’t blame the majority of my wild friends for sleeping their way through the worst of the weather, and on days like this I wish I could hibernate too. So, if like me, you are missing some familiar fauna, here are just a few of my visitors from this last year who will be hibernating somewhere on the farm. 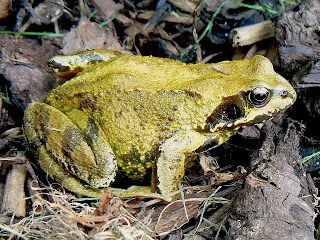 The Common Frog normally lives in a wide range of habitats, and breeds in puddles, ditches and ponds, and has even been known to breed in running water.

Hunting on damp nights, frogs eat slugs and worms – plenty enough of those in my garden! Common frogs hibernate through the winter, either at the bottom of ponds (breathing through their skin) or on land under refuges such as the woodpile or compost heap. 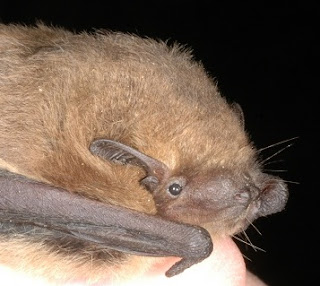 Pipistrelle Bats are active between March and November, hunting and eating insects on the wing in open spaces between the trees. Pipistrelles roost in trees and under the soffits of the farm buildings. They feed along the woodland edges and in the garden. They hibernate in crevices in buildings and trees as well as in our bat boxes. 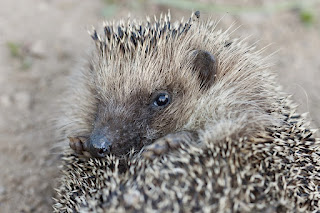 Hedgehogs travel over a mile a night whilst foraging for food. They have a broad diet, including worms, slugs, caterpillars and many other invertebrates, as well as frogs, berries and the eggs and chicks of ground-nesting birds. It is an interesting fact that, due to a variable resistance to adder venom, hedgehogs can even attack and eat adders. They are good swimmers and can also run fairly quickly. They hibernate in a nest made of leaves, usually under the shed or log pile. 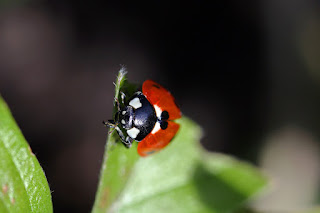 Ladybirds are perhaps the most well known and popular of all British beetles, and the seven-spot ladybird is one of the commonest species, although some individuals may have more or fewer spots. The common name, 'ladybird', was originally given to the seven-spot in honour of the Virgin Mary; the red wing cases symbolising the Virgin's red cloak, with the seven spots representing her seven joys and seven sorrows. Both adults and larvae are voracious predators of aphids, and are one of the gardener's greatest natural allies. When threatened, adults exude a bright yellow distasteful substance from the joints of the legs, which dissuades potential predators from them. Adults can be found overwintering in the garden shed, amongst vegetation and in crevices in the post and rail fences. They are often clustered together in fairly large numbers during this time of year.
Posted by thechickenwhisperer at 18:06 2 comments:

The start of the mating season has fired young Rowlie the cockerel with an extra burst of enthusiasm to tread the hens, not that he needed it, he had more than enough enthusiasm before!
Today I spotted him trying to work his moves on Buffy, my head girl, but she gave him an incredulous stare and a couple of pecks round the back of the head for his trouble and he soon went off the idea. He is a nice young chap really, and not as rough and clumsy as many young males, but she's quite right to play Cathy to his Heathcliff. Buffy is my oldest hen and a bird of very few words, but if she was thinking of saying anything at all, it would have been, “don’t send a boy to do a man’s job”.
Rowlie took the rough treatment graciously and covered his embarrassment by pretending to examine an imaginary bug at his feet. As placid as my birds are, (and Buffy is a very even tempered leader) it’s clear that finding your place and earning respect within the flock is a challenge for young birds.
Rowlie manages well enough though, and has a clever way of working things to his advantage. He has a coop of his own which he shares with a handful of the pullets his own age, and gets his fair share of treading opportunities when Rufus isn’t looking. He was brooded by his mum, Daisy, in the big coop as a chick, and lived there for the first 4 months of his life. That was until Rufus decided that Rowlie needed a place of his own.
Rufus does not allow him to join the others for corn treats, so Rowlie waits for me to give him a little pile of his own where Rufus can’t see him.  This works out well for Rowlie as he often invites a pullet or two to join him, which helps him to win over the girls. Who knows, perhaps one day even Buffy will accept his corn treats, and his advances......

Posted by thechickenwhisperer at 12:48 4 comments:

The 10 secrets of chicken whispering – Secret 2

Animals that are afraid, confused, agitated, frustrated or distressed cannot learn effectively and handlers who are in these states cannot communicate with their animals effectively. So secret number 2 is to stay calm and focussed.

Establishing a state of mind where you feel relaxed, confident and fully in control of yourself will convey a sense of calm and safety to your chickens. Steady, deliberate movements and speaking slowly, softly or with a light tone in your voice and minimal eye contact will ensure that they are not surprised, startled or caused to panic.

If what you are doing isn’t achieving the desired effect then stop doing it! Go back a step to a point where you and your animals are calm and relaxed. If you’re getting uptight or frustrated, take a break, sit back and review the situation until you can see things clearly. Keeping your cool, taking your time and working with your animals not against them, will eventually give both of you what you want. If your chickens become confused or fearful about anything that you ask of them, then reward them for doing something that they know and understand well. This will restore their confidence and get the two of you back on the right footing again.

Happy Whispering
Posted by thechickenwhisperer at 10:58 No comments:

Tips to fight the frost

Despite the blue sky and sunshine, it’s minus 2 outside today and everything is frozen solid. Although this is far from the worst of the winter weather, prolonged periods of freezing temperatures can make life a little tough for chickens. So here are my top 10 tips for surviving the snow and frost.
If anyone else has their own favourite tips for coping with the cold, please feel free to share them.

Posted by thechickenwhisperer at 11:55 5 comments: